ABOUT ARTICLES YOUTUBE INSTAGRAM CONTACT
TIPS AND TRICKS FOR YOUR BUILDS ...
THE LATEST PROGRESS ON MY BUILDS ...
WHERE I RIDE ...
ARTICLE
How to Properly Shorten the Forks
Tags:
BUILDS
HONDA
SABRE
CAFE
VF750S
TUTORIALS

This article will be a guide to the mysterious mechanism that is the motorcycle telescopic fork. We are going to cover its characteristic and how each affects the overall handling of the bike. Then we will illustrate how not to, as well as how to properly lower the front end of an old motorcycle.

First lets begin by going over the most common characteristics of the front suspension.

Since a picture is worth a thousand words, here is a few diagrams showing the characteristics above. 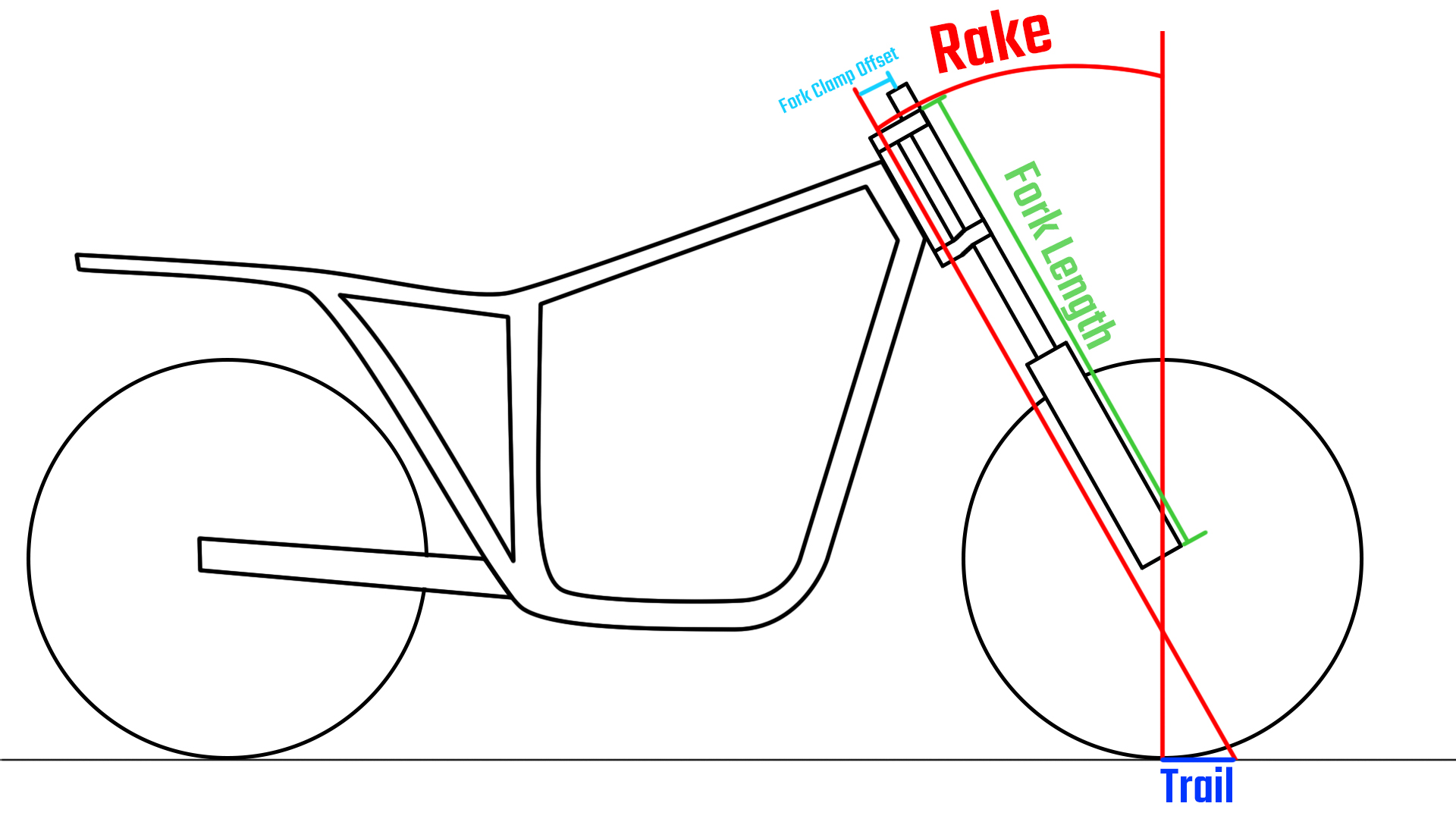 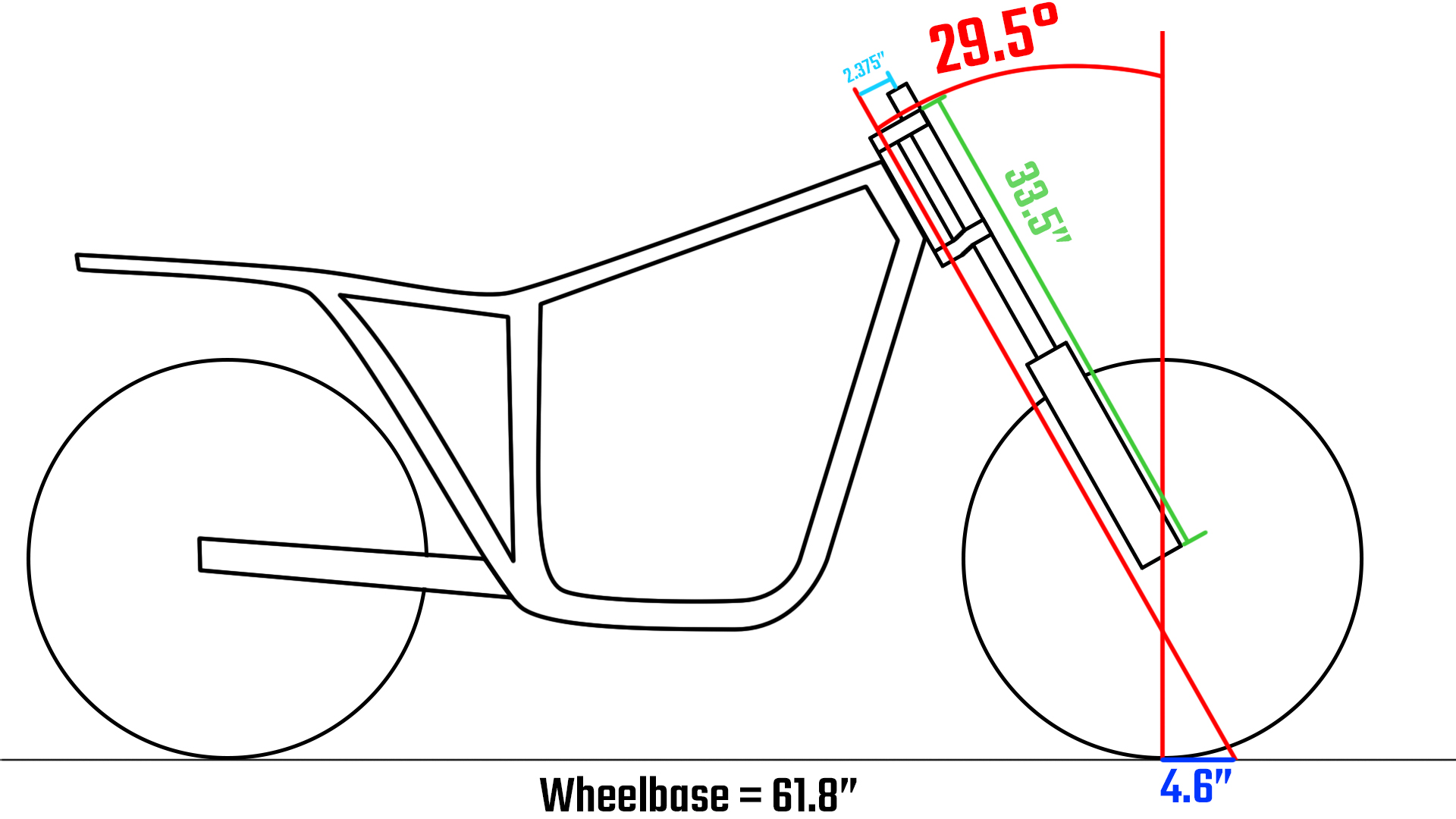 The 1983 model with the shortened springs would look like this. 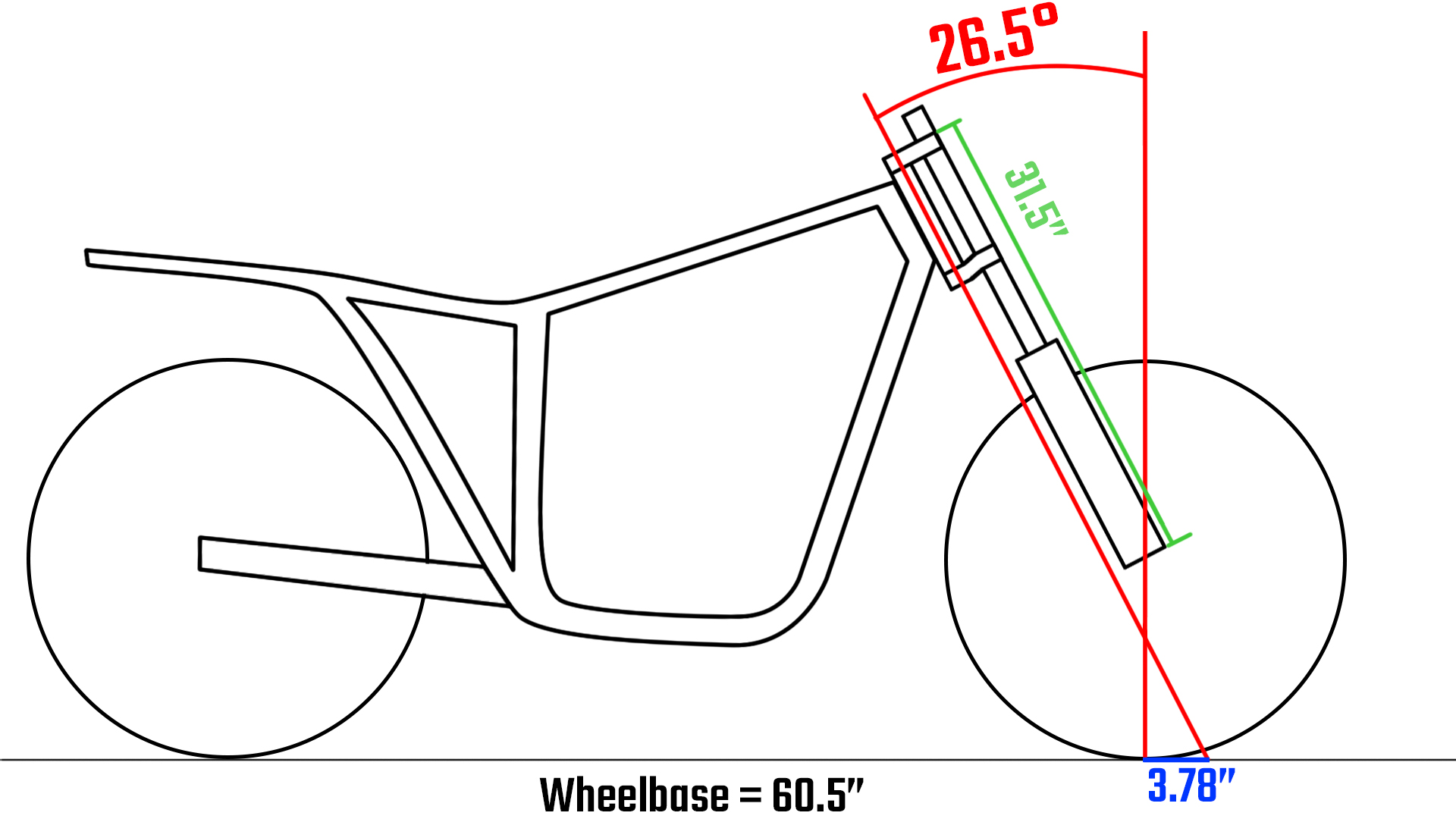 The 1982 model with the pulled up forks through the tripple trees like this.

I know its difficult to see the differences so here is a super imposed version of the stock and dropped forks setups. 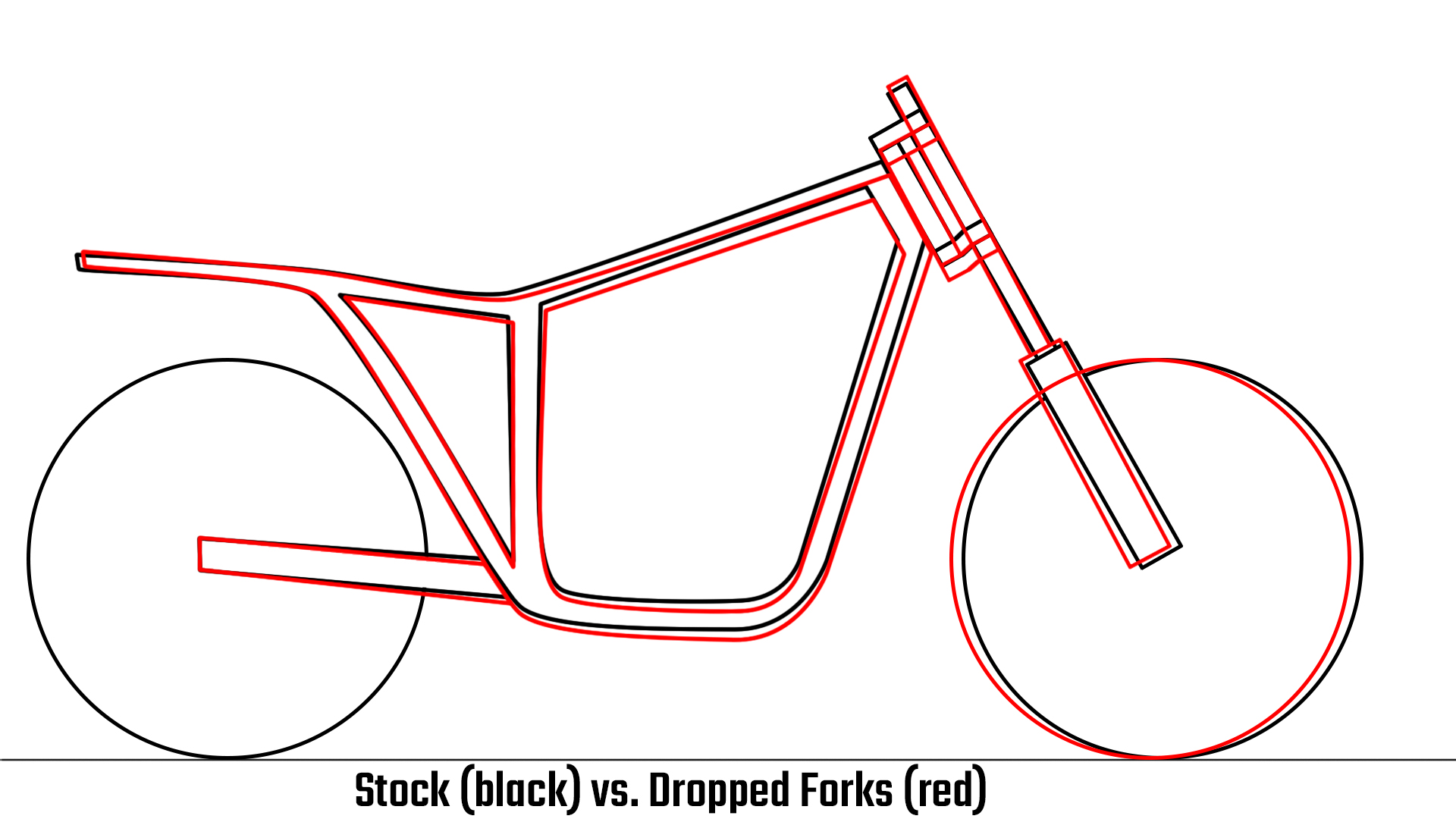 As you will see later in the actual photos it is hard to notice the difference, but if you look at the top of the frame where the tank sits. That is where you will notice the angle change. The tank sits more horizontally, and the bottom of the frame actually dips slightly lower.

So what does all that mean for the current project? Lets take a look at the parts bike (1983) and what I have done to it by cutting the springs and shortening the forks. 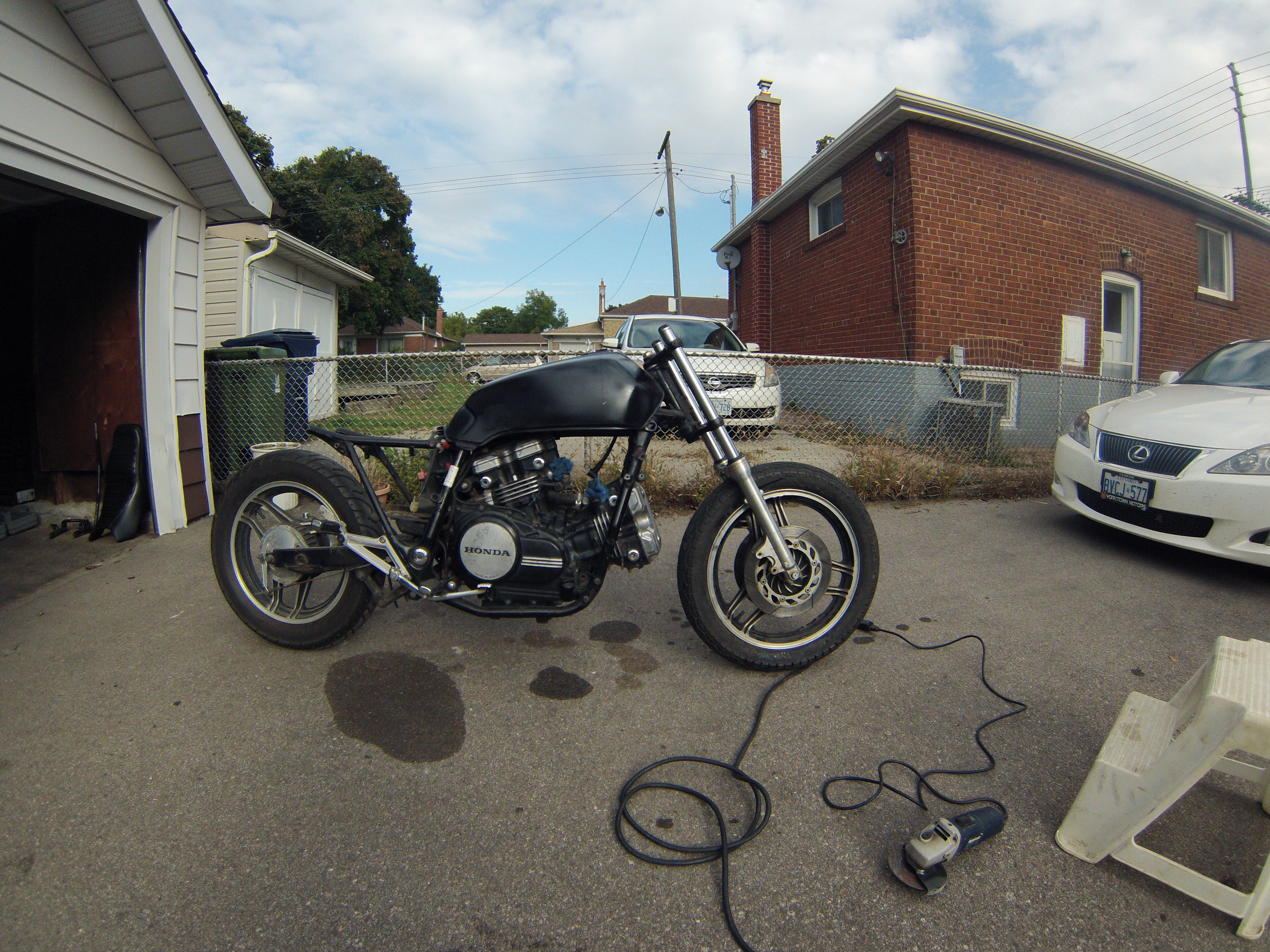 After i had already made the changes to the forks I had measured out the front end characteristics and these are the numbers I had computed:

What I had thought to be a pretty sick setup initially turned out to be a death trap after I did some research on it. The rake and trail that I had as a result of shortening the forks by 2" were actually not bad. They mimic the setup of a more sportier BMW motorcycle. The problem however was that those 2" were essentially taken off of the stock travel of the forks. Which at 5.5" one would think would leave plenty. Yes but no! The 3-3.5" of travel left on there is definitely not enough to sustain safe operation of the motorcycle with the fairly soft 35 year old springs. What this meant was that after full assembly and filled with fluids, with a person on top the bike would sag down another 1-1.5". Leaving 1.5"-2" of travel. Which is not at all enough. You might as well be riding with a hard front end. The bike would simply bottom out right away on the slightest of deceleration. Not fun.

So lesson learned I took the project bike and started stripping the front, in order to lower the front end in a much safer, far more scientific manner. 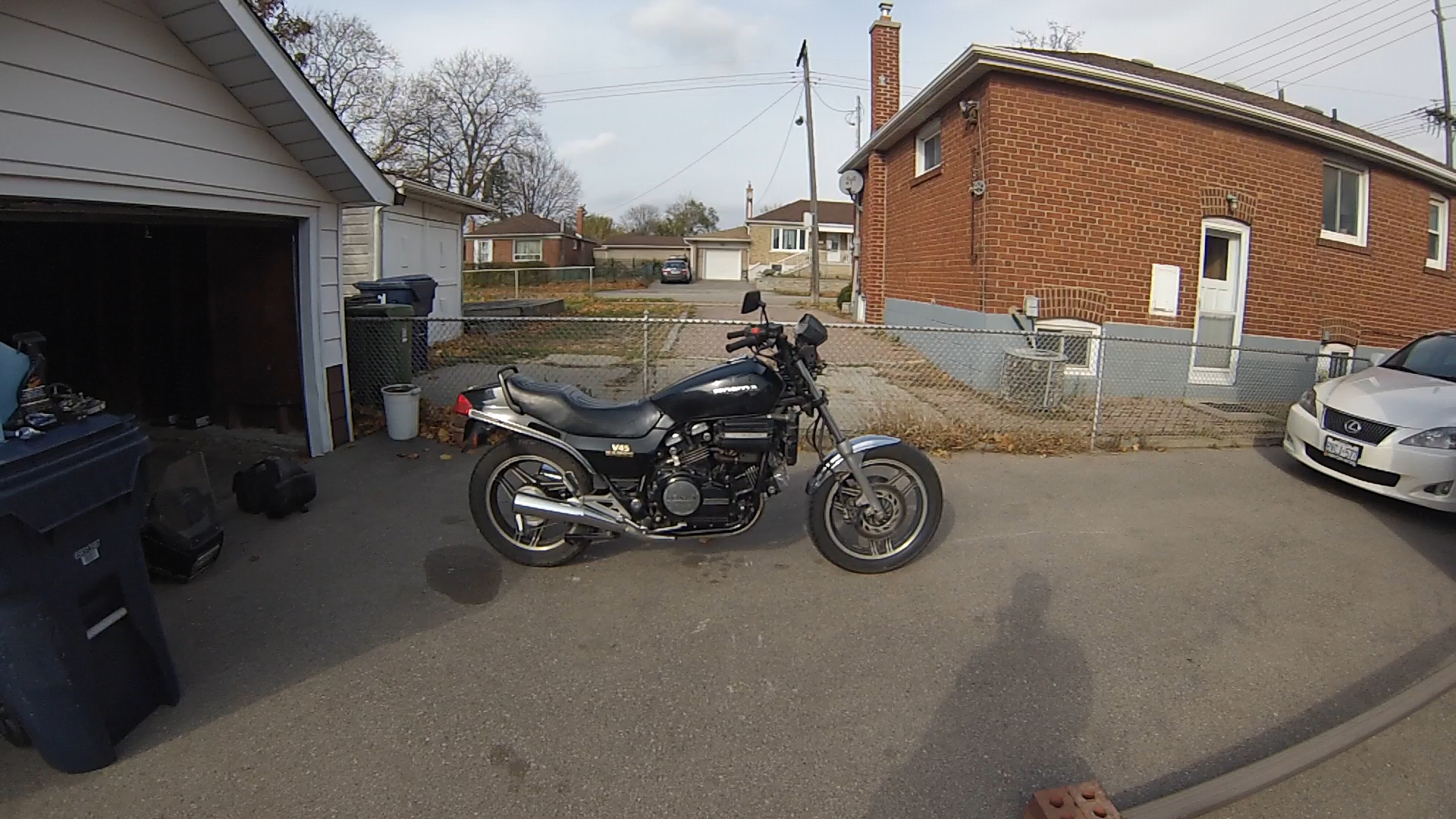 Before i began changing things i took a base measurement to know where I am starting from.

That out of the way I raised the front end and started to slide the forks up through the triple trees. At about 1.5" I figured I'd stop before I start running into clearance issues under compression. Then I measured everything again.

Now that seems like it should be quite a bit better. Since I have the leveling issue with my driveway I decided to recompute them by accounting for the 2.1­­­° of deviation.

So things are now looking like the handling of the bike would be quite different. A bit more responsive, a bit shorter, and definitely more fun to ride. So the moral of the story is do your research, and always consider safety. Here is the before and after pictures. The change is very subtle but when striped from the borderline ape hangers, and setup with clip-ons it will be more noticeable. 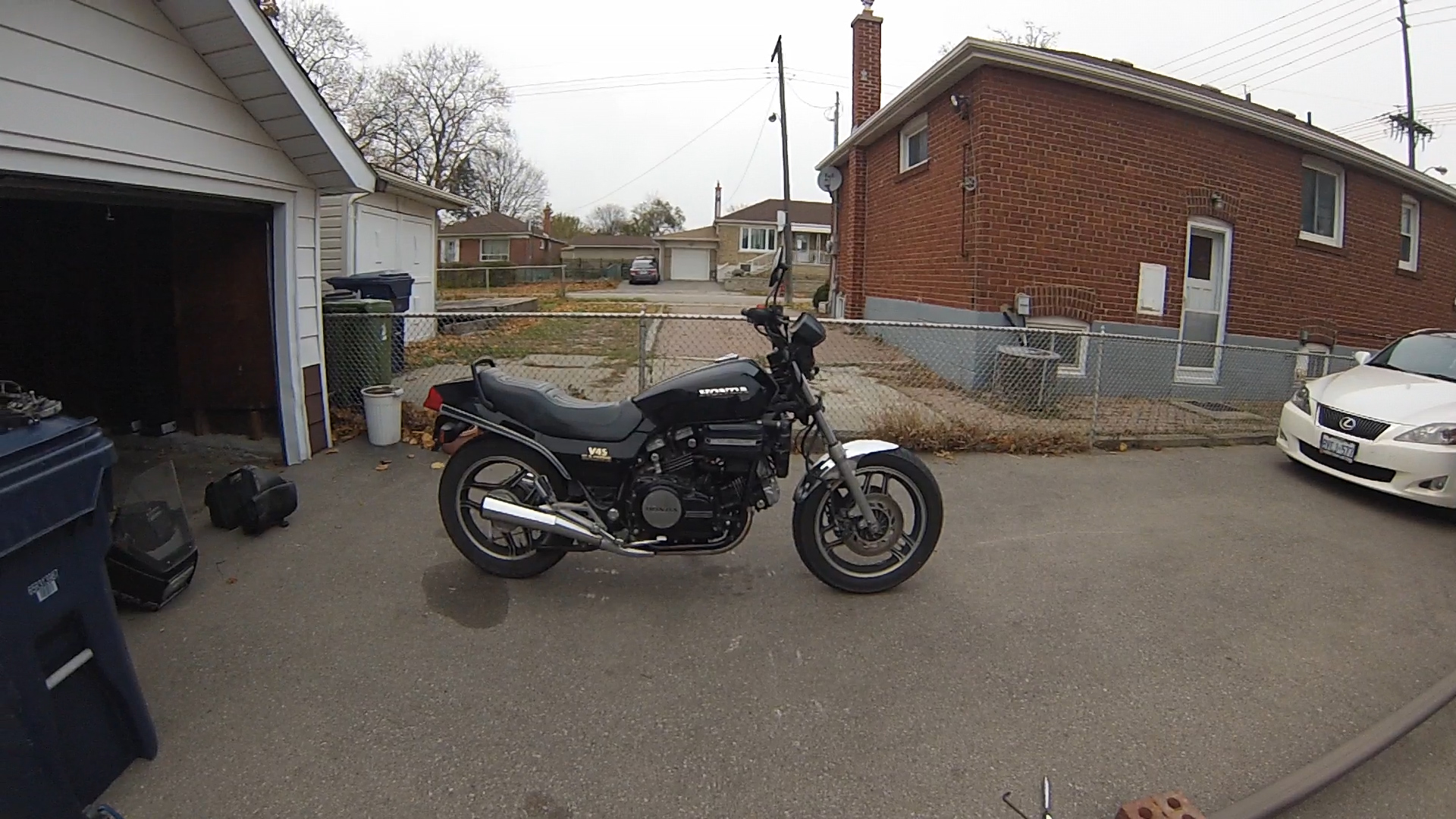